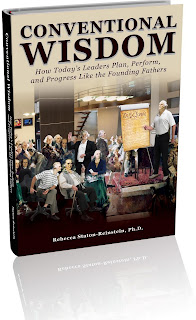 Here's what former Supreme Court Justice Sandra Day O'Connor had to say:
Thank you for sharing with me your new book Conventional Wisdom: How Today's Leaders Plan, Perform, and Progress Like the Founding Fathers. Your research into the planning sessions of the Constitutional Convention and the struggles that our framers of the Constitution faced has been cleverly weaved into the strategies of modern business. I am pleased to have your book.
I have been persuaded to reopen a "secret" webpage for a limited time so you can take advantage of a special offer and improve your own performance and learn from these historic and modern mentors. I did it myself. The very process of writing the book was a major learning experience. The insights I gained and applied helped me survive the economic downturn and thrive now that things are improving. You can do the same.
Discover your own conventional wisdom... Click here for the special offer.
* * * * * * * * *
(c) Rebecca Staton-Reinstein, Ph.D., President, Advantage Leadership, Inc.
Posted by Rebecca Staton-Reinstein at 8:18 AM No comments: 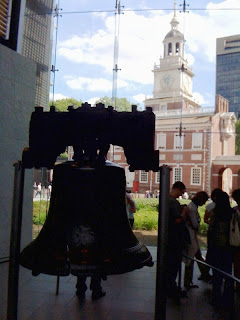 That was my Aunt Letha's advice when it came to the democratic process...As every election neared she repeated her maxim: "I never voted FOR anybody in my life...I always vote agin' 'em!" She'd love the Tea Party and all the anti-incumbent ballyhoo in the media. Despite the fact she had a nice government job with the IRS she had a rather jaded view of government officials at every level.
Like many people, she had her own way of enforcing term limits -- throw the bums out.
At this point many months before the November elections, that's what lots of folks are saying and doing in state primaries. And in a democratic republic that certainly beats violence, coups, and take overs. I just returned from Lagos, Nigeria. While I was there, the president died. There was a peaceful transition as the acting president was sworn in. Many people breathed a sigh of relief...There had been military take overs in the past and few peaceful transitions. In Thailand opposition to the incumbent precipitated violence and death so votin' agin' 'em seems a better solution.
But is it? Let's get a little historical perspective on the situation. I just spent some time in Philadelphia and had a chance to visit Independence Hall and wander through the historic district thinking about the Continental Congress, the Declaration of Independence, the Constitutional Convention, and the U.S. Constitution. It got me to thinking about being agin' 'em.
Of course the representatives that assembled in the 1770s and 80s were agin' taxation without representation, the Townsend Acts, Stamp Act, Intolerable Acts, and all the rest. They believed their rights as British citizens were being violated. Their protests did turn violent at times although it's easier to remember civil disobedience like the Boston Tea Party. Right from the beginning there were those who were ready to break with England and those who wanted to mend the growing rift. Tempers flared on both sides as the definition of patriot shifted until it solidified once war broke out. Yes, the revolutionary generation was agin' many things.
However, they were the first to understand that being agin' the British wasn't enough. They also had to be FOR something. What that something was for them was the ideal of a republic -- a government that represented the people and was agreed to by the people. When the 55 representatives showed up to represent 12 states (Rhode Island refused to come) in 1787 to write a new constitution, they were ready to define in detail what they were for. Gouverneur Morris, representing Pennsylvania, encapsulated their goals succinctly in the Preamble.
The success the framers had both in working to get the new constitution ratified and then to establish the new government was based on the fact that they stood on a solid platform of ideals, pragmatism, and political savvy.
James Madison, who played such a crucial role in the constitutional efforts was a career politician. From his first public office in his early twenties he served in representative body after representative body, seldom being out of office for any length of time. He eventually reached the executive branch serving as Secretary of State and then president for two terms...even though he presided over an unpopular war (1812.) He was an "insider" who sometimes voted with his next election in mind instead of the "greater good." Although generally thought of as a "conservative" by today's litmus tests he might be vilified, especially for his adamant views (and voting record) on the strict separation of church and state. His views and votes on slavery would also get him in hot water today. But at the end of the day, he believed, as did many of the founders, that public service, politics, was an honorable and necessary profession.
So as dearly as I loved my Aunt Letha, and she was a treasure, I have to respectfully disagree with her. In every election, I look at candidates of every stripe and try to figure out what they are standing for, what they will try to accomplish, and what ideals they will work to put into practice. Do they have the character and stamina of a Madison...if so, I'll vote for 'em.
* * * * * * * * *


Posted by Rebecca Staton-Reinstein at 2:12 PM No comments: