Is George Washington or James Madison one of your peeps? 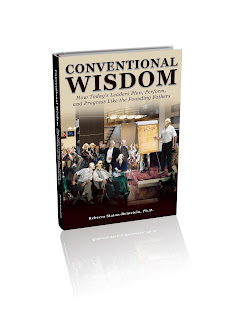 No, this is not a weird question. If you lead a team at any level of your organization, you should be on the look out for other potential leaders. If you’re a team member at any level of the organization, you should look at your own way of contributing. We have much to learn about successful team leadership and membership from George and Jemmy. Most of twenty executives and CEOs, interviewed for my new book on strategic leadership, chose George as a leader they admired from among the founding generation. Jemmy Madison emerged as an exemplary team member and leader. What can we learn from them?

George Washington --
--- was admired by his troops during the American Revolution, not because he was a nice guy – he was tough, insisted on discipline, and had a legendary temper. He was admired because the troops knew he cared about them, pleaded their case in the Continental Congress, and suffered hardships but never flinched in the face of the enemy.

--- became president in the midst of economic chaos, foreign plots to destroy the U.S., and internal political divisions. No one had ever been president of a republic covering so many people in such a large land mass. He had to invent the precedents from the most mundane to the most consequential.

--- could have been king – there were many who wanted to elect him king for life. Instead, he chose to serve two terms and then retire, just as he had when he resigned his commission at the end of the Revolution.

What does this teach us as leaders of teams from the executive suite to the shop floor?

The leader must:
* care about the team, share their situation, and fight for the team members’ success and recognition

* be creative, inventive, and make decisions based on vision and values

* know when to relinquish power and overcome the push of ego to hang on.

James Madison --
--- was the master of leading from behind, whether engineering the U.S. Constitutional Convention, drafting the outline for the Constitutional debates, or generating consensus behind the scenes.

--- articulated his case clearly and persuasively at every instance whether in the Constitutional Convention, the Virginia Constitutional ratifying convention or co-writing the The Federalist.

--- fought to pass the legislation that was necessary to establish the new republic as a strong nation – even when he was not 100% in support of the actions, such as authoring and championing the Bill of Rights or shepherding Alexander Hamilton’s financial plans through a reluctant Congress.

What does this teach us as team members from the executive suite to the shop floor?
* If you don’t take credit for everything, you can achieve more working to get the results the team and its leader need

* Sometimes you must fight hard to accomplish something you don’t agree with 100% to further the results of the team and its leader.

Washington and Madison had a special relationship that developed over many years. George was the charismatic leader who wanted to build a strong republic. Jemmy was the brilliant thinker and politician who knew how to persuade people of the need for a robust republic and its institutions. They made a strong team to bring about the Constitution and to get the new government established.

But even their team didn’t last forever. As Washington’s first term was ending, his cabinet team that included Alexander Hamilton and Thomas Jefferson was breaking down. The enmity that developed between these two titans resulted in the formation of the first political parties in the U.S. – the Federalists led by Hamilton and the Republicans led by Jefferson. Once Madison opted for Jefferson’s team, the Washington-Madison team broke down.

You can learn a lot from Washington and Madison AND modern executives who are strategic leaders…Conventional Wisdom: How Today’s Leaders Plan, Perform, and Progress Like the Founding Fathers examines how contemporary executives exercise strategic leadership, utilize their own Madison Factor, build effective teams, and deal with mistakes and tough decisions.

Learn more from the Constitutional framers and modern leaders. Get your copy of Conventional Wisdom today using the special pre-publication offer at http://www.conventionalwisdomcenter.com/.

When the going gets tough…You know the rest of the cliché…but what does it mean to “get going?” One thing not to do is to spend too much time listening to the same bad news over and over…or spending too much time around the water cooler (or wherever people congregate these days) bemoaning the state of the global economy. This brings on that other cliché, “Misery loves company.” All we do is whip ourselves up into a greater state of panic.

I think there is another cliché that is much more useful. The Chinese ideogram for “Crisis” is made up of those for “Danger” and “Opportunity.” I’m not suggesting living in a dream world and ignoring the danger. I am suggesting that when it comes to macro-economics, we can’t do much so why waste energy and time yammering on about the dire state of things. In fact, successful people have always figured out that the way to deal with a crisis is to look at the “opportunity” side of the equation and put our energies there.

In 1787 in the U.S., the headlines would seem eerily like those in 2009 – Foreclosures ruin families…Inflation rises…Pirates disrupt shipping…violence increases…hostile countries waiting for collapse…congress deadlocked…
Just 4 years after the end of the American Revolution the country was collapsing and Britain, France, and Spain were circling the imminent road kill waiting to seize the tastiest morsels.

Luckily George Washington, James Madison, Alexander Hamilton, Benjamin Franklin and 51 others decided to commit treason (technically) for the second time. They assembled in Philadelphia for 4 months in that long hot summer and hammered out the new Constitution.

They could have stayed home and watched their families suffer, their businesses fail, and the government flail about. Instead, they looked at the “Opportunity” side of the equation. They seized the opportunity to create a powerful plan for change…to put all of their ideas of republican government to work…to create a large republic from scratch…It hadn’t been done before…They were in new territory…Territory that was ripe with opportunity.

So whether you’re an individual and have just lost your job or an entrepreneur struggling to stay afloat or a large company or institution getting ready to make drastic budget cuts…Stop for a moment. What opportunities are there for you? What are you uniquely qualified to take advantage of? What is being overlooked by all the others who are focused on the danger?

Many years ago I worked for a big corporation that had a major downsizing…The folks who thrived in this crisis were those who took the opportunity to reexamine their lives, their values, and their goals and strike off in new directions. These are the non-victims…The choice is yours. You can take your role model from the framers and embrace opportunity or from those people the media dig up who are circling the drain, hopeless and helpless, and looking for a hand out. You don’t have to participate in the recession…it’s really optional…Opportunity calls.

Posted by Rebecca Staton-Reinstein at 6:18 PM No comments: