Customer Service Ain't Dead Yet! 3 ways to make it work!

When the phone rang late one afternoon, I was surprised to hear the appointment person from the diagnostic center on the other end. She was calling to find out where my request for records was. OK, let's back up.


I recently changed doctors and, because the medical industry lives in the 19th century, I had to take care of getting my medical records from Dr. A to Dr. B. When I did this about 6 years ago, I ended up transporting them myself. I'd called the diagnostic center, talked to a very helpful woman I'll call Rose and she said she'd fax me the request form.
Somehow the request form got deleted on my end but I didn't know. So at first I was surprised to get Rose's call. No problem - she'd send another one. OK - first surprise; she had followed up. But it gets even better. She gave me a direct phone number to call when I faxed the form back. She told me to tell the receptionist to come find her as she was usually away from her desk. OK - second surprise.
When I called Rose, the receptionist said she'd go find Rose. OK - third surprise. Then I heard the receptionist put down the phone - no holding muzak hell - and after about 5 minutes Rose picked up the phone and proceeded to find the form, check it, and assure me she'd get the records sent that day. All pleasant, all helpful, and all the extra mile. OK- fourth surprise.
I know this facility well and have been going there for almost 20 years. It's a very busy place and I'm sure lots of demands on the staff. But Rose took those extra few minutes to take care of a patient as if it mattered.
I could fill this blog week after week with stories of bad customer service. My business takes me around the world and like any traveler I have horror stories to relate. But that's hardly news. Rose was big news.
Here's how companies could replicate Rose: 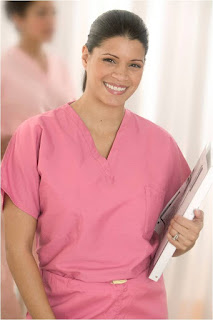 Rose genuinely cared about people. In spite of the volume of work, she kept up with the requests and when mine didn’t appear, she called. This is different than going through the “have a nice day” check list.
2.    Involve people in devising better systems to serve customers: The folks who know most about what bugs people are those on the front lines talking to them every day, whether the local barista or person on the phone in a far-off place. Ask them. Let them come up with a way to solve the problem or suggest better ways to help customers get what they want.
Rose had come up with her own system for making sure patients/customers got what they needed. She convinced coworkers to make sure they let her know when someone needed help and she wasn’t available.
3.    Recognize talent and let people ‘teach’ others: This institution happens to have a great reputation and sends staff through training for many things. However, each unit and doctor is responsible for additions to the ‘corporate’ initiatives. Savvy managers know they have valuable employees who figure things out and take initiative. Why not recognize that initiative and allow the exceptional person to ‘train’ the others?
Rose set an example for other people. Caring is contagious. (Believe me; folks outside her area in other parts of this vast medical complex are not like Rose – just the ones in her little corner of the universe.) She took it on herself to see that other people were in cahoots to deliver exceptional service.
So hats off to Rose! Thanks. You remind me of a young man in the Shanghai lost luggage department for an obscure airline…He called me long-distance a couple of times on his cell to find out if my luggage had been located as I made my way back from an extended trip to Asia. Meanwhile, the main carrier seemed to have trained folks to be as rude and unhelpful as possible…but that’s another story. Today, we’ll glory in the Roses of this world who take a few minutes to care.
*     *     *     *     *     *
©Rebecca Staton-Reinstein, president, Advantage Leadership, Inc.


No great historical links to the founding fathers in this post. Their letters home from the Constitutional Convention hit on all the same themes of poor service business travelers harp about today; poor food, inflated prices, lack of convertible currencies, inadequate expense budgets, slow reimbursements…plus they had to share rooms and sometimes beds with fellow (snoring) delegates! So maybe our complaints aren’t so bad.
Posted by Rebecca Staton-Reinstein at 12:10 PM No comments:

If particular care and attention is not paid to the ladies, we are determined to foment a rebellion, and will not hold ourselves bound by any laws in which we have no voice, or representation.
Abigail Adams
Abigail always spoke her mind and got right to the point. She's been on my mind the last few days because of the serendipitous convergence of two separate events.

On the national scene, this is week of the Masters golf championship played at the Augusta National Golf Club...or should we say the epitome of the "old boys" club. Locally, here in South Florida, Women Executive Leadership held its regular book club meeting. WEL works to put more women on corporate boards and in executive positions.

So what's going on?

The Augusta facts are fairly simple. The golf course opened in 1933. Women are not allowed to be members although they can play the course by invitation. The club excluded Blacks until 1990. IBM has been one of the major corporate sponsors for the Masters tournament at Augusta and the four previous CEOs were invited to join. Current CEO, Virginia M. Rometty, has not been invited.


The WEL book club discussed Knowing Your Value: Women, Money, and Getting What You're Worth, by Mika Brzezinski, co-host of MSNBC's Morning Joe. Her book discusses the struggles of women, even those in top positions, to get paid what they are worth or at least comparable to men who hold the same positions.
When the women's movement re-emerged in the early 1960s many of us believed the days of sexism were numbered just like de jure segregation. But as Mika and Virginia and many of us have discovered, we still have a way to go (despite what the cigarette commercial told us.) Not asking for what we want has been a major stumbling block for women. In our book club discussions several women pointed out how they had overcome this barrier -- all very inspiring and great role models and path breakers.
But wait a minute...It's 2012. 2012. Not 1933 when no one saw any problem keeping women out of a club. Not 1957 when we first met June Cleaver being the perfect housewife/mom. No, it's 2012 and not only is it time to end the nonsense of unequal pay which hurts companies who say they embrace diversity and empowerment and engagement and...
But where are IBM and Virginia Rometty in all this? Can you imagine the same situation if Augusta still didn't admit Blacks and IBM showed up to sponsor the Masters with a Black CEO?
Let's go back to Abigail again for some more of her conventional wisdom:
Arbitrary power is like most other things which are very hard, very liable to be broken.
Here's where a little leadership could come in. What if the CEO and her board simply said, very politely and ladylike of course, "Sorry, guys. We won't sponsor an event at your discriminating club."
But if such a conversation took place, it hasn't come to light yet. IBM's 14-member Board which boasts 3 women including Rometty, has a wonderful opportunity to take some leadership here. It's not about whether Rometty would like to be a member or not personally. Reportedly she's not an avid golfer. This is about standing up and saying, "This is not the way we do things at IBM. We don't need to have our name associated with your troglodyte policy. We'll look for other events to sponsor that reflect our corporate culture."

In fact, IBM has two pointed statements on its website, taking this exact stance:
Employee well-being and diversity
Employee well-being is incorporated in every aspect of IBM’s global business, from our strategic and business planning to our operations. IBM also has a longstanding commitment to diversity and considers it a competitive advantage in serving clients.
This strong foundation brings us to where we are today...This is the point where we can take best advantage of our differences — for innovation. Our diversity is a competitive advantage and consciously building diverse teams helps us drive the best results for our clients.
So now's the time for some leadership...from both men and women; the IBM Board and CEO, the Augusta membership, every woman who has yet to demand what she is worth, and every man or woman who has been complicit in keeping the biases alive.
Or we may just have ot invoke Abigail's rallying cry and...
*     *     *     *     *     *     *     *
(c) Rebecca Staton-Reinstein, President, Advantage Leadership, Inc.
Author: Conventional Wisdom: How Today's Leaders Plan, Perform, and Progress Like the Founding Fathers

Posted by Rebecca Staton-Reinstein at 3:43 PM No comments: