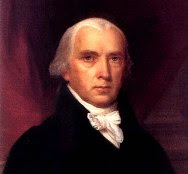 Making sausage is yucky
The talking heads have been going on for some time about how broken our government is and how disgusted everyone is about watching the "sausage making." Maybe so...If you were watching C-SPAN (or one of the networks covering the health care debates and votes) last night, you got a glimpse of the "process," the "rules," the jawboning, and arm twisting. But is that really a demonstration of a broken system? Was there some halcyon day in the past with the two parties discussed issues calmly and rationally and then agreed without rancor?
Not really.
Back to the first big controversy
Travel back to the very first Congress...that's right...back to 1789. There were no parties yet. (They would arise in George Washington's second term.) However, there were "factions." Groups of representatives were beginning to congeal around specific issues representing the wide variety of opinions in the country. In fact, ratifying the Constitution and setting up the government had been widely debated and many states ratified by paper-thin margins. North Carolina and Rhode Island were still not on board. So the beginnings of our government were not all sweetness and light.
The first big issue to get the blood boiling was "assumption." The states and the Continental Congress had run up huge debts during the Revolutionary War and the European creditors were howling for their money and threatening to cut off all credit to the fledgling country. Alexander Hamilton, the Secretary of the Treasury, had brought to Congress an extensive bill to create a financial system for the U.S. The plan was for the federal government to 'assume' the debt, set up a national bank, issue bonds, and establish what we would recognize as a modern financial system.
The push back and opposition were immediate and fierce. The details are not as important as the general principles that fire today's health care and other debates. What is the role of government? What is the balance of power between the states and the federal government? Big government or small?
Leading the opposition to Hamilton's plan was James Madison. Before the evolution of party leaders and whips, he had assumed those roles and was the principle leader in the House of Representatives charged with implementing President Washington's agenda. But when it came to assumption, Madison balked, and began to retreat from his former partner in writing the Federalist. The impasse was as heated and nasty as any we have seen lately. Remember there were no rules for the press so that papers and pamphlets contained anything and everything...more akin to our blogosphere than the modern press.
The deal is struck
One evening Thomas Jefferson, Secretary of State, invited Hamilton and Madison to an intimate little dinner party. Although they were all quite coy later about what transpired that evening, the results were soon apparent. Madison twisted enough arms to that assumption passed the house with a few votes to spare and he could vote against the bill and keep his seat with his anti-assumption constituents. Then he engineered the quid pro quo -- the vote to establish the new capitol on a parcel of land in northern Virginia not far from GW's home. (Hamilton worked behind the scenes to forestall New York and Pennsylvania who were vying for the honor.)
So there we are...the first Congress operated just like the present one...horse trading, arm bending, rule bending, backroom (dining room) deals. The vast majority of legislation is always a compromise of some sort. We are too diverse a country for it to be otherwise. Sometimes the deals are pretty despicable and sometimes relatively benign...but there are always deals.
The founders were enamoured with the Roman Republic and wanted to emulate it in many ways. But the Roman Senate was no gathering of saints any more than the state legislatures and Continental Congress where most of the new Representatives to the first Congress cut their political teeth.
Operating as designed
So, no, the U.S. government is not broken. It operates as designed with its checks and balances, backroom deals and public posturing. It's designed to come back to the center more or less and designed to be messy like all creative processes. Only dictatorships operate without the mess.
* * * * * * *

Read more about the founders and their leadership styles and processes...and meet modern leaders who use their same approaches. httl://www.ConventionalWisdomCenter.com and read Conventional Wisdom: How Today's Leaders Plan, Perform, and Progress Like the Founding Fathers.
Posted by Rebecca Staton-Reinstein at 4:44 PM No comments: